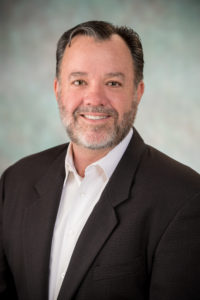 Patrick Spargur moved to Las Vegas in 1969. He graduated Clark High School in 1983, where he served as Student Body President during his Senior year.

Patrick’s 30-year professional career has spanned the healthcare, hospitality, manufacturing, and nonprofit industries.
He served on Credit Management Association’s Nevada Board of Governors from 2009-2014. He received CMA’s Credit Manager of the Year in 2012, Mentor of the Year in 2013, and served as the Chairman of the Gaming Industry Group. In 2013 he was named to the Finance, Credit, and International Business Executives- Global Board of Advisors and was the recipient of their Service, Growth, and Development Award. In 2014 he was the recipient of the National Credit Management Association’s Mentor of the Year Award.
In addition to being the President and Co-Founder of Project 150, he was a member of All Pro Dads for six years and previously volunteered as a Big Brother for seven years. He and his wife, Gabriela have two girls, ages 9 and 11. In his spare time Patrick enjoys watching sports, traveling and spending time with his family.
Favorite Quote: If we have no peace, it is because we have forgotten that we belong to each other.-Mother Teresa

Scroll Up Scroll Up