You can help us sort donations, assemble family meal bags, and other special projects.  Join us for one hour, two hours or more to pack school orders and sort and fold clothing for Betty’s clothing showroom. Anytime between 9 am – 5 pm Monday through Friday.

Boisterous, amiable, vibrant, and lovable - all qualities Brady Caipa embodied. When Brady walked in, his smile lit the room. His infectious personality was impossible to resist. Brady made sure you felt special when he was around and he loved making people happy. The son of Carlos and Kim Caipa, Brady was one of their four children. Part of a large, loving family in which the value of taking care of others was instilled, Brady wanted to go into medicine. He was an athlete who loved playing soccer. His faith was a huge part of who he was, giving him the foundation for his strong love for his family and friends.

Although Brady was this whirlwind of positivity, he was deeply concerned about the homeless. He could never accept that there were people who had so little when he had so much.  One of his most treasured yearly activities was delivering socks to the homeless people on the 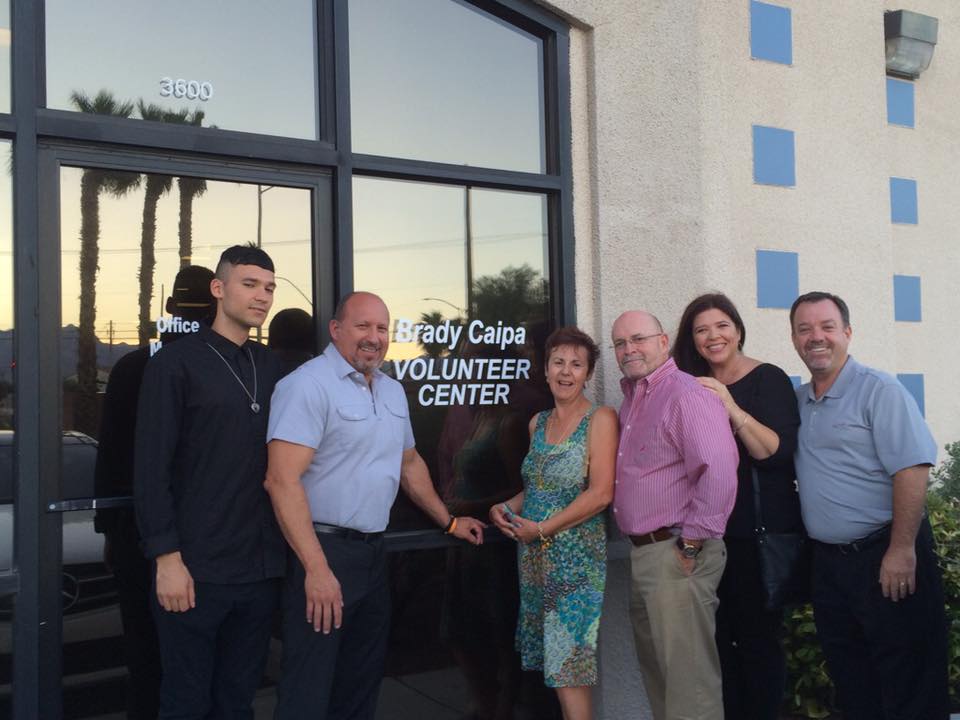 streets of Las Vegas at Christmas time with his uncle, brothers and sister. His uncle, who had previously been homeless himself, taught his nephew how valuable a new pair of clean socks were to someone on the streets by taking him on his deliveries.  The needs of the homeless weighed heavily on Brady far beyond the nights he visited the downtown streets. He was known for stopping to talk to people on the street, always giving what he had and often getting money from friends to give as well.

During his senior year, at the age of 17, Brady passed away, leaving behind many broken hearts. However, the people who loved him the most knew that we had to carry on his legacy of making the world a better place by taking care of people who needed help.  Just a few months after Brady’s passing, on his 18th birthday his family threw a birthday party to join together to celebrate Brady’s life. They decided to make a donation to a new organization, started by one of his best friend’s fathers, to help teens in need in Las Vegas, Project 150. What the family thought would be a few hundred dollars turned into a donation of over $7,000. Brady was working his magic from above. In August 2015, Project 150 named their building the “Brady Caipa Volunteer Center” to carry on Brady’s legacy of compassion and love.

Uniting Project 150 with Brady Caipa’s name is an honor that embodies Brady’s huge heart and is the perfect legacy for this teen who made such a positive difference during his short time here on earth. It is truly a match made in Heaven.

Manage Cookie Consent
To provide the best experiences, we use technologies like cookies to store and/or access device information. Consenting to these technologies will allow us to process data such as browsing behavior or unique IDs on this site. Not consenting or withdrawing consent, may adversely affect certain features and functions.
Manage options Manage services Manage vendors Read more about these purposes
View preferences
{title} {title} {title}